A homeless man jailed in 1996 for 10 years for allegedly stealing a donkey has rededicated his life to doing something productive and rare in the Upper East Region— growing acres of palm trees.

Zack Aduko told Starr News the dream to do something new— to raise an orchard not common in Northern Ghana— was conceived at the Navrongo Central Prisons. He walked back to freedom from jail 14 years ago. But his family, according to him, did not receive him when he returned to his Nyariga home in Bolgatanga, the Upper East regional capital, in 2006.

He said wherever he turned, people turned their faces away. He was free from prison. But he was not free from stigma. There was no companion. The woman he had chosen for a wife, who bore two children (a boy and a girl) for him before he was sentenced, was not allowed to live with him. The reason: he had not performed the traditional marriage rites. Whilst he struggled with stigma in freedom, his daughter also died, aged only 21 years.

Rejected and alone, he took his dream to a piece of land he says belongs to his father at Nyariga, resettled himself there and transformed the fallow property into a 3-acre plantation containing not only palm trees— a high-value crop largely native to Southern Ghana— but also having banana, orange, mango, cocoyam and cassava among other ‘exclusive’ crops.

A room not fit for man

A desolate structure, just about the size of four telephone booths or polling cubicles combined, is where Zack sleeps. Erected on the farmland, the ‘single room’ is walled with dirty old roofing sheets punctured in many parts. It is supported by crooked logs standing with Y-shaped heads in the four corners as pillars.

The leaky ‘room’ has no door. There is no mattress inside. When Starr News took a peep into the structure, there was nothing ‘valuable’ the poor ex-convict could boast of. On the sandy floor of the ‘room’ was a white sack being used as his sleeping mat. A few ragged clothes hung ‘chaotically’ on a wooden bar overhead. Also indoors was a collection of old articles which an observer said could trigger nightmares. How that wonky structure managed to ‘stand on its feet’ when an unforgiving rainstorm stripped some strong-looking buildings ‘naked’ in the region recently remains a mystery. Had that angry storm located the lonely structure, and had ‘marked’ it for demolition, it could have simply uprooted the entire cubicle, airlifted the owner with everything he owned inside and tossed them far away into the unknown.

A teacher and celebrated radio presenter based in the region, Titus Alika, who brought Zack’s plight to Starr News’s notice, has provided 550 bricks on his own to put up a befitting room for the 47-year-old ex-offender. Some bricklayers and carpenters have come together, too, with a promise to construct that room free of charge. About Gh¢6,000, Starr News learns, is needed to purchase the required building materials— cement, roofing sheets, wood, roofing nails, et cetera. The heavy rains are in again, with escorting storms. The single-room project cannot start. The money needed to start is lacking.

The rare plantation raised at Nyariga by Zack, a baritone-voiced shy native of a next-door community called Zaare, is reminiscent of the cool palmy environment mostly found in the tropical rain-forest areas, or within the coastal belt, of Ghana.

Besides the ‘inspiring’ shade offered by the orchard to those drawn to the relaxing place by the incredibly beautiful sight, children from the locality and other places also go there to enjoy free fruits from the trees without hindrance. Around the farm is a canal that draws its water from the Vea Dam in the Bongo District. The tree crops, young and old, draw water throughout the year from that canal.

Whilst everybody is benefitting today from the future he pictured when he was in confinement at Navrongo, life seems to be promising too little or almost nothing in Bolgatanga even now that he is free. He wants to grow more of the crops and sell them so he can reconstruct his life and rebuild his ‘broken’ home. But he says he is not resourced. Without beating about the bush, he mentioned just what he needed. 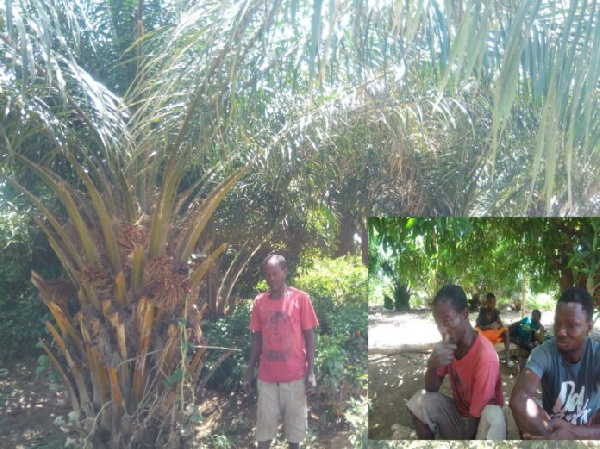 “I need a water pump to aid me in watering the plantation. I need to grow more of the cocoyam but I’m not resourced,” he told Starr News on his farm.

The memories of his life in prison are indelible and have preserved his eyes as an inexhaustible well of tears. Each time something is asked about his jail past, his eyes drip with tears of grief in the middle of the answer. Every time Starr News asked, a stream of tears interjected his narration.

“The intensity of the pain I felt and the number of productive years wasted still make me cry. Growing up, I dreamt of having a family and living peacefully with that family. I cherished having children around me. Ten years in jail took that dream away. I shouldn’t have been where I am today,” his said, wiping a tear on the inside of his right elbow and forearm as Starr News engaged him on his life-after-prison project at Nyariga.

Walker Mallow Set To Drop A New Song This January

Letter To God Has Surpassed 50,000 Plus Streams Across All Platforms – Walker Mallow